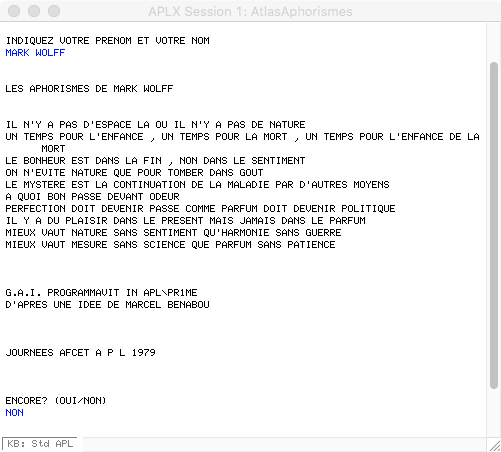 These aphorisms were generated with code developed by the Oulipo.

In the Atlas de littérature potentielle (1981, rev. 1988) the Oulipo mentions a number of experiments with computers as tools for exploring algorithmic constraints on writing. One example is the complete text of a computer program written by Paul Braffort that generates aphorisms (311-315). Today such programs are textbook exercises for learning computer languages, but Braffort wrote the program for a mainframe in the 1970s using the language APL (A Programming Language). Developed by Kenneth Iverson at IBM in the 1960s, APL is one of the earliest computer languages (after Fortran and Algol) designed to manipulate data as matrices. Although it is still in use by some programmers working in financial analysis, APL today is a fairly obscure language for which there are few compilers and interpreters.

In the 1981 edition of the Atlas Braffort extols the virtues of APL not only as a system of notations for formalizing literary structures but also as code that executes complex algorithms (113). Although he claims his computer program provides “a thoroughly complete analysis of the procedures used” to generate aphorisms, it needs to be executed in order to test the analysis and observe how the algorithms work. To this end I have transcribed the code published in the Atlas so that an APL interpreter can compile and execute it. The code is comprised of specific functions and pre-loaded variables. To run the code, you need to )LOAD this file into an APL interpreter such as APLX (there are other interpreters out there but APLX is the only one I have successfully installed in OSX and Ubuntu). At the prompt enter your name and the code will deliver an aphorism for each character you type (including the space between your first and last names).

If you manage to get the code to run, you may wish to understand how it works. For that I recommend APLX’s online tutorial.