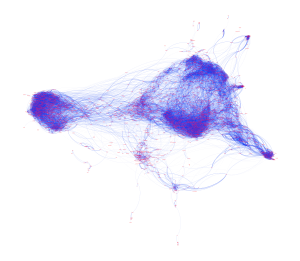 A cloud representing a vector space model of words from over 1,300 French texts published between 1800 and 1899.

In his 1966 essay “Rhétorique et enseignement,” Gérard Genette observes that literary studies did not always emphasize the reading of texts. Before the end of the nineteenth century, the study of literature revolved around the art of writing. Texts were not objects to interpret but models to imitate. The study of literature emphasized elocutio, or style and the arrangement of words. With the rise of literary history, academic reading approached texts as objects to be explained. Students learned to read in order to write essays (dissertations) where they analyzed texts according to prescribed methods. This new way of studying literature stressed dispositio, or the organization of ideas.

Recent developments in information technology have challenged these paradigms for reading literature. Digital tools and resources allow for the study of large collections of texts using quantitative methods. Various computational methods of distant as well as close reading facilitate investigations into fundamental questions of the possibilities for literary creation. Technology has the potential for exploring inventio, or the finding of ideas that can be expressed through writing.

The Word Vector Text Modulator is an attempt to test if technology can foster inventio as a mode of reading. It is a Python script that makes use of vector space models of vocabularies mapped from a corpus of over 1,300 nineteenth-century documents in order to transform a text semantically according to how language was used within the corpus. An experiment such as this explores the potentiality of language as members of the Oulipo have done with techniques such as Jean Lescure’s S+7 method, Marcel Bénabou’s aphorism formulas and the ALAMO’s rimbaudelaire poems. With technology we can investigate not only how something was written and why it was written, but also what was possible to write given an historical linguistic context.